Recently I've been learning more and more how to cook vegan. It seems hard at first to be totally plant-based, for sure. There are some super cheap ingredients which I had no idea were so useful! So here are my absolute top tips, things to put in your store cupboard and you can use every week, for all kinds of uses.

So: pick an ingredient, put it in your store cupboard, and learn how to make MORE dishes with that one ingredient. It's good to get better, and the practice comes in handy when you're low on ideas mid-week some time.

Of course there are some much more well-known ingredients which everyone associates with vegetarians: lentils, tofu. I'm assuming that you don't need as many tips about those, you can find recipes everywhere.

We've discovered some lovely vegetarian recipes this year! The lockdown last year was actually a pretty good opportunity to get better at cooking, especially when we had to dig into our stockpile - yes, it really got to that point, strange to think now. This year was a bit less extreme in that sense, but we've come across lots of new recipes, and in particular getting better at being vegan-compatible. Here is a selection of the absolute best recipes we've been eating this year.

These two main courses are not vegan but lovely anyway:

See also my list from five years ago (FIVE??), The best vegetarian recipes of 2016. If you want to follow along with more foody explorations, I have a dedicated Twitter feed at @nomnomdan.

Shout outs to some awesome convenience foods we found in the Netherlands:

After some in-depth field research, I'm ready to report that the Netherlands alcohol-free beer scene has boomed in the last couple of years. We've now tasted 24 of them! And 7 of them are great.

Van de Streek's "Playground IPA" has been around for a while now and is in all the supermarkets, cafes, etc - and, I have to be blunt, it's still the absolute best low-alcohol IPA we've tasted, even though we've now tried over 100 from around Europe.

But there is a whole carnival of others, and some of them are right up there in the top. There's a good representative for each of the classic beer styles, plus some funky quirky ones too. You should definitely check out:

Other Dutch breweries have attempted the low-alc wheat beer: Grolsch and Brand's are OK, Lowlander's tastes like a bitter lemon not a weizen. (Also, FYI, don't go anywhere near the Hoegaarden 0.0 - it's awful, despite my hopes for it. It's not Dutch... but the warning is needed.) If you want a wheat beer, go straight for the Vrijwit!

And if you want more... van de Streek's other alcohol-free beers: Fun House is a good NEIPA, Non-Bock a tasty bock, the grapefruit IPA good and fruity.

Other IPAs: there are good ones from Jopen, van Breugem ("Klein Zoentje"), Uiltje ("Superb Owl"), Waterland and Brand. The "Brand" is a great choice if you need genuine-zero in an IPA.

As ever - the big spreadsheet lists these and hundreds of others (or here's a PDF of it) from around Europe (124 at time of writing).

Back when I first tried alcohol-free beer, I only knew of one from Sainsbury's (not bad) and Becks Blue (meh) - little did we know that by 2020, there would be so many that it's hard to keep track of them all! There are many good ones but also a few to avoid. I'm shocked to report that not only have we tasted over 70 alcohol-free beers, but also... a whopping twenty-two of them are so nice that I'd enthusiastically recommend them to all of you.

I won't list them all directly here (but you can see the spreadsheet if you like - oh yes... and here's a PDF of it). Here are some of the most fabulous and notable ones we encountered. Cheers!

Our other top picks are:

Don't believe me? I don't mind, that means more for me :) But if you want my credentials: I'm not even a vegan and I think these ice-creams are great.

These companies all do other flavours too (for vegan chocolate ice cream, Oatly's is also good). But if you've not tried vegan ice cream before you might not know where to start, so here's your executive summary.

Inspired by my recent trip to India, tried some more Indian cookery tonight.

The main lesson I learnt this time was about amchoor - a powder made from sun-dried green mangoes.

Ah no, the main lesson was actually how to eat curry one-handed using a chapati. But I've definitely not mastered that one yet.

Anyway amchoor has a nice clear flavour and is used in some Indian cuisine to add fruity zestiness to a dish without making the dish too wet. The top hit from this evening's meal was amchoor chana (chickpeas with mango powder). An otherwise simple chickpea curry is made zingy by a generous teaspoon per person of amchoor cooked in. 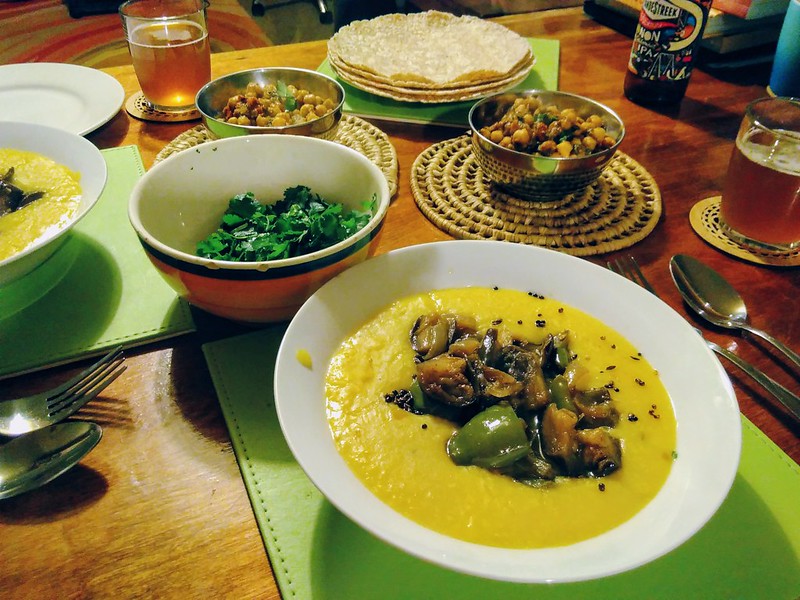 I'd like to get better at dhals too. Although a basic dhal is easy - just simmer some lentils/pulses for a while, with some spice - I haven't got the hang of the different types of pulses and how you'd use them. Here we were using a recipe which called for a mix of half red lentils, and half mung dal (mung beans). It gave a good gloopy texture.

My thanks to Samira Agnihotri, who kindly gave me some home-made amchoor!

For anyone trying Veganuary this year, or just working out how to cook vegan more often, here are my tips of some handy recipes!

The best alcohol-free beers in Europe

We've sampled LOTS of alcohol-free beer in the past year. Why? Well - you might not believe me about this - some of it's getting really good. And it's great to be able to have a lovely beer even if you don't want to be woozy afterwards.

So WE HAVE DONE THE …

For a cook, Veganuary was a really interesting challenge. A whole month of being vegan! Here are some things I learnt:

Going to try veganuary? We're going for it this year.

Here are some great recipes I made/found recently, all vegan. Maybe they'll help you to enjoy January extra-special:

Soft-drinks that pubs should serve but don't

What do vegetarians really eat?

Fake meat around the world

Food I found in India

The best vegetarian recipes of 2016