Inspired by Nigel Slater's recipe I made a great and simple vegetarian stew (vegan, in fact), using my black bean chorizo to help add depth of flavour. (If you haven't got any of that, you could probably do something similar just with a blob of black bean sauce, even though the flavour is different?) 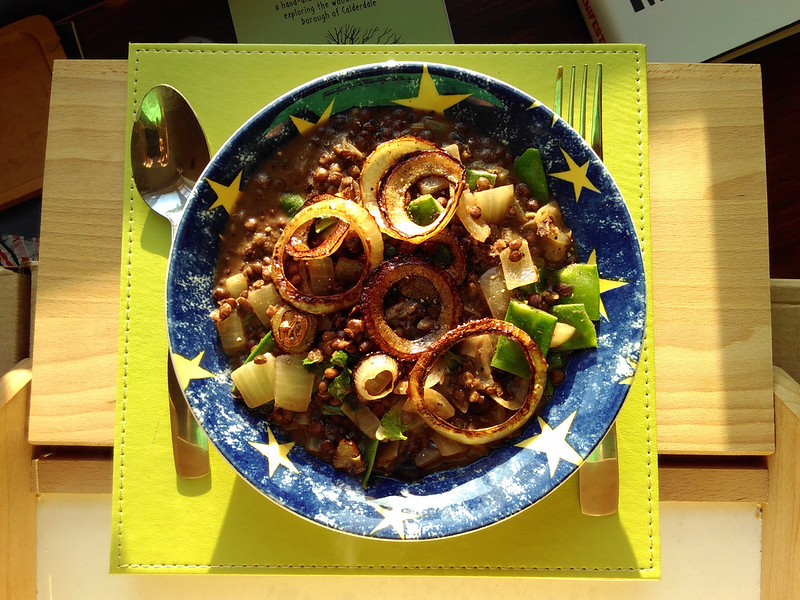 In a deep pan which has a lid, heat up about 1 tbsp vegetable oil, while you chop the onion. You want to chop about three-quarters of the onion into whatever size pieces, and the remaining one-quarter of the onion slice it into nice rings, about half a centimetre thick.

The misc pieces of onion, put them in the pan and give them a good fry to get them softened. Add the three spices and stir around. Then add the chorizo - not too much, it's mainly for flavour. Let this cook for two minutes or so.

Then add the lentils and stir, then add enough boiling water to only-just-cover. Put a lid on, turn the heat right down, and let this bubble for 15 minutes.

In the final five minutes, heat about 2 tbsp of vegetable oil in a frying pan. Make sure the onion rings are separated into circles, and put them in the pan to fry briskly for 5 minutes, turning halfway. While these are getting a little crispy, chop the mangetouts roughly into maybe 3 pieces each and chuck them into the stew, and also add the bits of parsley and the lemon juice.