Here's an audio phenomenon you should know about: Schroeder-phase complexes.

These are harmonic series which are designed so that their amplitude envelope is maximally flat. When you synthesise a harmonic series of partials, you know what frequencies you should use for the component sinewaves: F, 2F, 3F, 4F, etc. But what phase should you use?

Often we stick with a simple default such as every partial starts with zero phase. There's an issue with that, though, which can lead to issues in perceptual tests: the amplitude envelope, within one pitch period, is quite bumpy, because there are moments when the component phases all line up to produce strong amplitude. Sometimes this bumpiness leads to experimental confounds.

One thing you could do to work around this is use random phases, but adding this extra randomness into an experiment is usually not that desirable.

In 1970 Schroeder published a formula for choosing the phases so that the resulting waveform has a minimal crest factor, i.e. no big amplitude peaks. The formula is pretty simple but my blog doesn't render equations yet so see e.g. this paper.

Let me prove this to you directly: here I've synthesised the same harmonic sound with five different choices of phase. The top row, "sine-phase" and "cosine-phase" correspond to two versions of the default phase-aligned choice, and look how spiky they are: 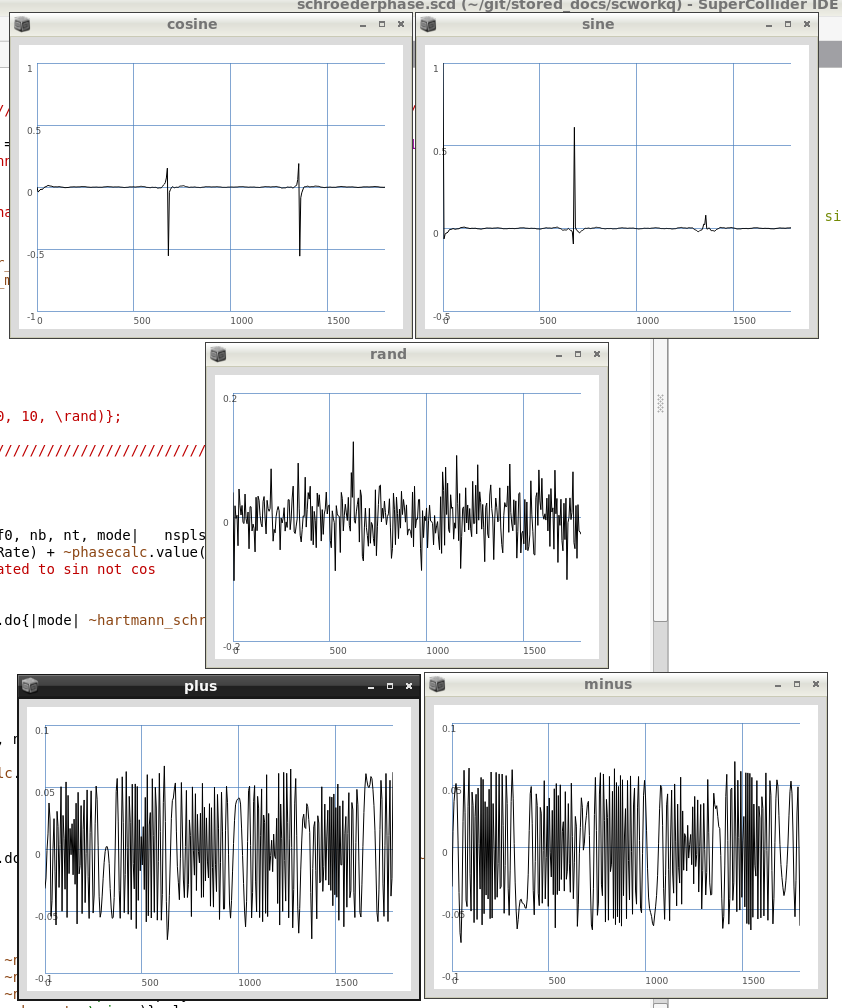 In the middle is random phase, and at the bottom are two plots from Schroeder-phase. Please note that the y-axis has different scales in each plot - the waveforms each have the same energy, and the same Fourier-transform magnitudes, despite looking very different!

The reason that there are TWO Schroeder plots is because we have an option to flip the sign (time-reverse the waveform) while preserving the waveform characteristics. The shorthand label that people sometimes use is that one of these is "Schroeder-plus" and one is "Schroeder-minus".

BUT WAIT there's one weird thing I haven't shown you yet, and it pops out when you listen to the examples. These stimuli can be used to find frequency thresholds - at low frequency we can tell the difference, but at high frequency they sound identical. And the weirdest thing is when you listen to them at very low frequencies, they don't sound like static harmonic complexes at all (evenr though that's definitely how we generated them), they sound like otherworldly down- or up-chirps.

Listen to this audio file where I play a plus and a minus, at different frequencies. First at 300 Hz, then at 65 Hz, then 16 Hz, then 2 Hz. At first you'll hear two essentially identical tones, but then the differences become noticeable, and then overwhelming:

It's a nice demonstration of the fact that any periodic signal can be conceived as a sum of stationary sinusoids - as in Fourier analysis. Here we synthesised a chirpy nonstationary-sounding (but periodic) signal, starting from scratch from the sinusoids.

My implementation is here as SuperCollider code, inspired by this paper: Phase effects on the perceived elevation of complex tones.