I want to tell you which is the best DAB radio. I have it here in front of me: 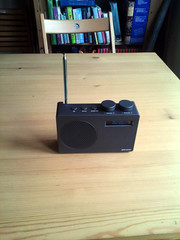 I've seen many DAB radios in my time. My ex worked at the first BBC digital radio station when it launched, so we saw all the early models.

Old analogue radios, like a lot of analogue things, had this great built-in interface quirk. In the old days you couldn't just choose a radio station, you had to turn a dial and that would tune the frequency to the station you wanted. I'm NOT talking nostalgia here, I'm talking usability. This strange quirk meant you could learn the interface really well - the radio stations were always at the same place on the dial, and you very quickly learnt exactly how much to turn to go straight from Radio 4 to Radio 1.

DAB radio designers didn't really have this, they just had a big list of stations. In fact they had it worse than that: if there was any "natural" interface driven by the mechanics of DAB it would be a hierarchical list where first you choose your multiplex, then you choose your station. The early DAB radios forced you to do this. Firstly, navigating a hierarchical list is fecking annoying on any device that doesn't have a massive computer screen. Secondly, the hierarchical list means nothing to anyone. No-one knows intuitively if Smooth FM and the World Service are on the same multiplex or not, and they shouldn't have to know.

DAB radio designers came up with various ways round this. They added presets of course - lots of FM radios have this too. Trouble is, they generally had to add lots of buttons, especially as they needed to support both DAB and FM. Bleh. Clicky interfaces, menus to scroll through. Bleh.

Well now the perfect DAB/FM radio interface has been settled on and it looks like this: 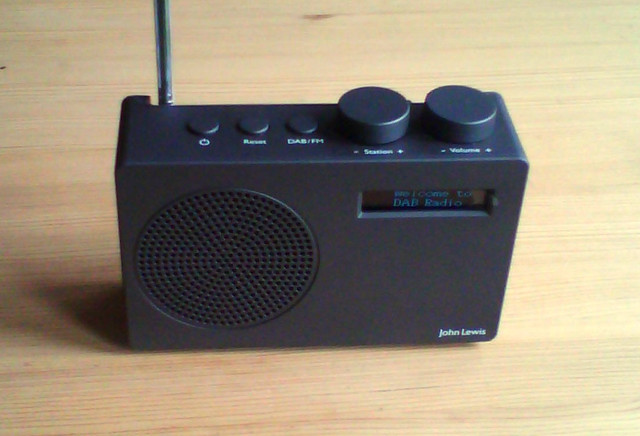 It's from John Lewis (it's called the "Spectrum"), and it's a little portable thing. It does DAB, FM and USB, it runs off battery or mains, it doesn't take more than 4 seconds to turn on (unlike many other digital radios which sit around saying "hello" while secretly they're frantically booting stuff up).

But the one thing I want you to notice is how easy it is to operate it in the dark, with your eyes closed, or with one hand stirring a pot of soup. There is a very small number of buttons/knobs, and when you grab for it without looking you can instantly feel which button you're on. After a day or two you can change the station, change the volume, change DAB/FM, or turn it on/off without looking, and really that's all you need!

The minimalism continues through the interface too: there are no presets, for example. Some might find miss the lack of presets, but it takes away a lot of interface complexity. There's an implicit "two-preset" character anyway, since of course it remembers one DAB station and one FM station, the ones you had on last.

The two dials on the top are not continuous dials, by the way, they're click-wheels. I do miss a little the ability to be as subtle as you like with the volume control, but I don't mind much. On the station dial, for DAB you're wheeling through the alphabetical list, which you can sometimes do with your eyes shut but not always - but at least the stations are always in exactly the same place, it's still a learnable interface. On FM, the dial changes the frequency, as you'd expect, plus the curiously named "Reset" button does auto-scanning for you on FM, and that works fine too.

I actually bought this radio for my ex. After seeing it in action for a while, I went and bought another one, for myself!