At our local International Supermarket they do some great turkish delight. However, the batch I bought recently tasted funny - I think they must have stored the turkish delight alongside a big mound of parsley, because it had obviously absorbed some flavours which didn't really suit it!

So what can you do if your turkish delight has absorbed some flavours? Make it absorb some more!

So I experimented with tea-smoking the turkish delight. I was nervous that something weird would happen in the wok (I've never tried warming up turkish delight before...) but it turned out fine and the smoky flavour works well.

Actually I'd like them a bit more smoky than they are, so you might want to increase some of the proportions here:

Get a wok (or similar) and put a layer of tinfoil in.

Rip open the teabags and pour their contents onto the foil. Then add roughly equal quantities of rice and sugar. Mix it up a bit with your fingers. Put the wok on a medium heat. It'll take a few minutes until it starts smoking.

Meanwhile, you'll need something into the wok which will hold the turkish delight well away from the heat, but will allow the smoke to circulate. Maybe some sort of steaming pan. I used a thing for stopping oil from spitting at you.

Don't put the "thing" into the wok yet, keep it to one side. On top of the thing, put some tinfoil and put the pieces of turkish delight onto that. Space them out, and make sure the foil won't stop smoke from circulating. 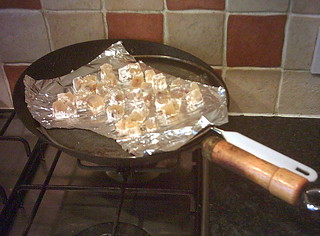 When the tea has started smoking, put the thing-and-foil-and-delight into it, and put a tight lid on top. (You could use foil, if you don't have a good lid.)

Turn the heat down a bit and let the thing smoke gently for about 15 minutes. Don't peek inside! You don't want the smoke to escape! After 15 minutes, turn off the heat and just leave the pan there for a couple of hours to let the process continue.

When it's all finally done, open the pan - in a well-ventilated area. Take the delight out, and sprinkle with a bit more icing sugar to serve.