"A group of local mothers are squatting next to Londonâs Olympic Park to tell the government we need social housing, not social cleansing" as featured in the Guardian and on Russell Brand's Youtube channel. The estate is Carpenters Estate, Stratford.

"Carpenters Estate," I thought to myself, "that rings a bell..." 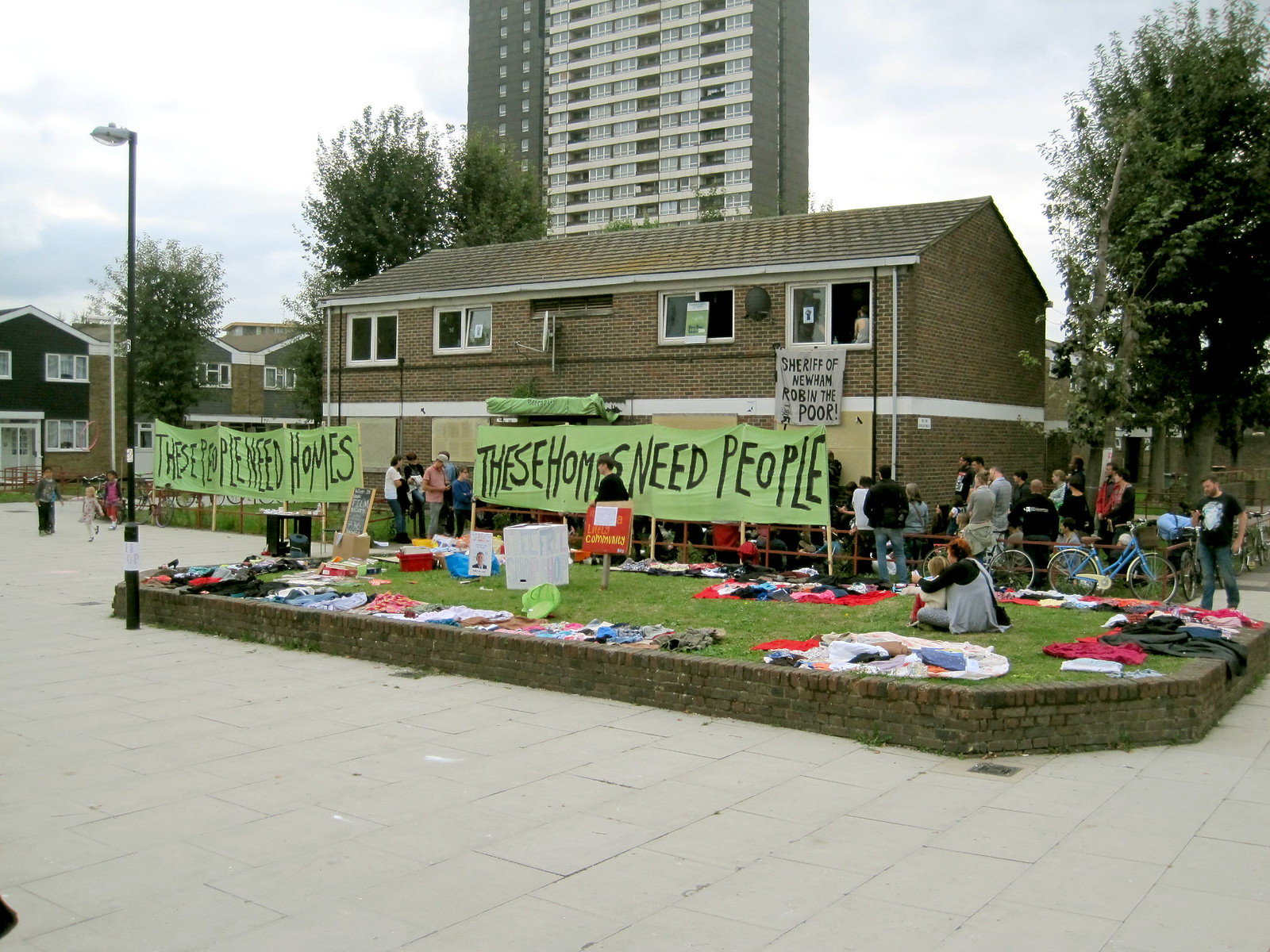 It turns out Carpenters Estate is the one that UCL had proposed in 2011 to redevelop into a new university campus. The Greater Carpenters Neighbourhood "has been earmarked for redevelopment since 2010". "All proposals will take into account existing commitments made by the Council to those people affected by the re-housing programme." However, locals raised concerns, as did UCL's own Bartlett School (architecture/planning school) students and staff. (There's a full report here written by Bartlett students.) In mid-2013 negotiations broke down between Newham and UCL and the idea was ditched.

It seems that the council, the locals and others have been stuck in disagreement about the future of the estate for a while. At first the council promised to re-house people without breaking up the community too much, then it realised it didn't know how to do that, and eventually it came to the point where it's just gradually "decanting" people from the area and hoping that other things such as "affordable housing" (a shadow of a substitute for social housing) will mop things up. I can see how they got here and I can see how they can't find a good resolution of all this. But the Focus E15 mothers campaign makes a really good point, that irrespective of the high land prices (which probably mean Newham Council get offered some tempting offers), the one thing East London needs is social housing to prevent low-income groups and long-time locals from being forced out of London by gentrification.

The gentrification was already well underway before the London Olympic bid was won, but that had also added extremely predictable extra heat to the housing market around there. One part of the Olympic plan included plenty of "affordable housing" on the site afterwards - in August 2012, housing charity Shelter said it was good that "almost half" of the new homes built in the Athlete's Village would be "affordable housing". Oh but then they calculated that it wouldn't be that affordable after all, since the rules had been relaxed so the prices could go as high as 80% of market rate. (80% of bonkers is still crazy.)

Oh and it wasn't "almost half" (even though in the Olympic Bid they had said it would be 50% of 9,000 homes), by this point the target had been scaled back officially to about 40%. In November 2012 Boris Johnson insisted "that more than a third of the 7,000 new homes in the Olympic Park would be affordable". The Mayor said: 'Thereâs no point in doing this unless you can accommodate all income groups.'"

Oh but then in January 2014 Boris Johnson announced that they were changing their mind, and instead of 40% affordable housing, it's now going to be 30%. "Fewer homes will be built overall, and a smaller than promised percentage of those would be affordable." ("The dream of affordable housing is fading," said Nicky Gavron.) The new target contravenes the House of Lords Select Committee on Olympic Legacy report 2013-14 which said "It is important that a fair proportion, at least [...] 35%, of this housing is affordable for, and accessible to, local residents". Boris Johnson said it was a "price well worth paying" as a trade off for more economic activity. Strange assertion to make, since East London has bucketloads of economic activity and a crisis in social and affordable housing!

P.S. and guess why they decided not to build as many homes as they had planned? It's to make room for a cultural centre codenamed Olympicopolis. (Compare against this 2010 map of planned housing in the park.) Plans for this are led by... UCL! Hello again UCL, welcome back into the story. I love UCL as much as anyone - I worked there for years - but we need to fix the housing crisis a billion times more than we need to solve UCL's real-estate issues.