Having learnt Icelandic for a while I know about ÃorrablÃ³t ("Thorrablot"), the annual Icelandic celebration. I've heard the horror stories about HÃ¡karl (the delicacy made of rotted buried shark) and BrennivÃ­n (the cumin-flavoured schnapps traditionally used as an antidote to the taste of the shark...). But I'd never experienced any of these, so it was a good idea when Louise (she's half Icelandic) invited us along to this year's ÃorrablÃ³t. 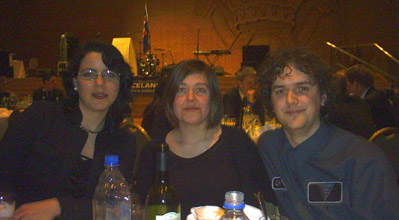 It's extremely frustrating when you've spent years learning a language but you can't understand a single sentence, simply because it's all going so fast. If we'd been using pen and paper maybe I'd have been able to converse in Icelandic but unfortunately I was reduced to speaking English and dropping the occasional Icelandic word in to see if I could get it to be understood. Even that wasn't particularly successful.

Anyway, there were speeches and there was dancing, and there was a raffle (I won a CD! In fact a double CD, of a famous icelandic comedian whose main talent would seem to be gurning, judging by the cover). But the main thing that might be worth writing about is the food. I hadn't seen buried-shark before, and surprisingly it looked like little 1 cm cubes of whitish patÃ© (not sure what it looks like before they bury it). It wasn't too difficult to eat actually, although very rubbery, but then within a few seconds you get a disgusting aftertaste and you're compelled to reach for the BrennivÃ­n. I'm a big fan of strange foreign schnapps (Becherovka is my favourite, the Czech drink that tastes like pine shelving) so I liked the BrennivÃ­n.

All the food and drink, even the bottled water, was brought specially from Iceland for the occasion, so there was much more to try. The reindeer patÃ© was very nice, and the salmon and the herring were quite straightforward - possibly the least intimidating items on the buffet. I've had harÃ°fiskur (literally "hard fish") before so that didn't surprise me. It's some kind of white fish that has been dried and dried until it has the consistency of cardboard, so it's quite difficult to chew through but it tastes nice and goes well with a bit of butter on. Another bizarre delicacy was lamb's testicles, made into a kind of patÃ©. I found the taste of it quite nasty so I couldn't manage much of that.

All of these were the first course, with rye bread and potato salad and some other things. The main course was relatively straightforward lamb, cooked very very rare and with a creamy sauce. It was absolutely delicious ("Ãetta er ljÃºfengasta dilkakjÃ¶t, og Ã¡lveg mÃ¡tulega steikt" - one of the first Icelandic sentences I learnt), although I've never had meat as rare as that except for sushi.

After that came the raffle, the dancing, and the wandering around chatting to people. It was a good night and I'd do it again - maybe try and produce a complete Icelandic sentence or two next time.