Curried beetroot and paneer (indian cheese) - well why not?

Two things I bought from the indian supermarket: some raw beetroot and some paneer (indian cheese) flavoured with cumin. I decided to have them for my lunch, and it turned out rather well. 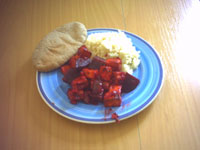 It's like currying anything really: just start off by frying some chopped onion (and some cumin seeds), adding a bit of finely chopped ginger and garlic after a few minutes, then add the main ingredients and some liquid and get currying. I added the paneer first, turning up the heat to get some nice colour on it, and then after a while added the peeled and chopped beetroot at the same time as the boiling water. You need to let this boil vigorously for a while (about half an hour) so that the beetroot softens and the liquid reduces. Serve with rice and/or bread, or as a side dish, and it's very nice.