Jack had this great idea to find the locations of solar panels and add them to OpenStreetMap. (Why's that useful? He can explain: Solar PV is the single biggest source of uncertainty in the National Grid's forecasts.)

I think we can do this :) The OpenStreetMap community have done lots of similar things, such as the humanitarian mapping work we do, collaboratively adding buildings and roads for unmapped developing countries. Also, some people in France seem to have done a great job of mapping their power network (info here in French). But how easy or fast would it be for us to manually search the globe for solar panels?

(You might be thinking "automate it!" Yes, sure - I work with machine learning in my day job - but it's a difficult task even for machine learning to get to the high accuracy needed. 99% accurate is not accurate enough, because that equates to a massive number of errors at global scale, and no-one's even claiming 99% accuracy yet for tasks like this. For the time being we definitely need manual mapping or at least manual verification.)

(Oh, or you might be thinking "surely someone officially has this data already?" Well you'd be surprised - some of it is held privately in one database or other, but not with substantial coverage, and certainly almost none of it has good geolocation coordinates, which you need if you're going to predict which hours the sun shines on each panel. Even official planning application data can be out by kilometres, sometimes.) 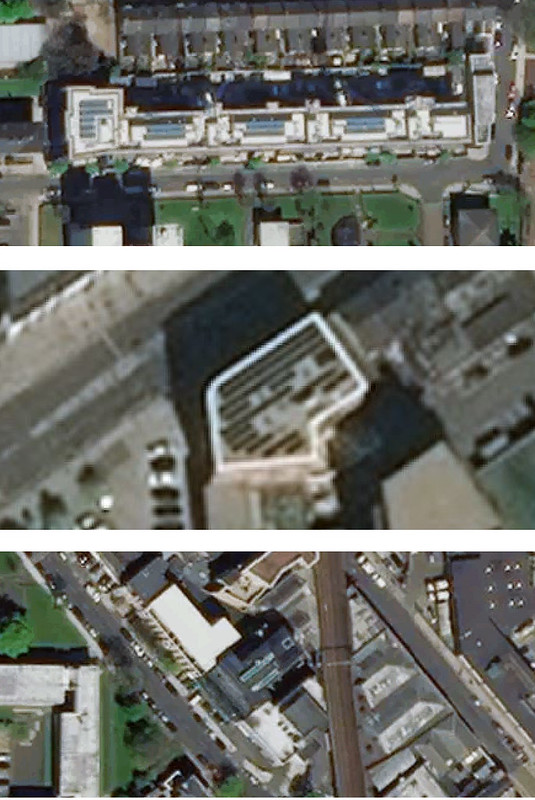 Jerry (also known as "SK53" on OSM) has had a look into it in Nottingham - he mapped a few hundred (!) solar panels already. He's written a great blog article about it.

This weekend here in London a couple of us thought we'd have a little dabble at it ourselves. We assumed that the aerial imagery must be at least as good as in Nottingham (because that's what London people think about everything ;) so we had a quick skim to look. Now, the main imagery used in OSM is provided by Bing, and unfortunately our area doesn't look anywhere near as crisp as in Nottingham.

We also went out and about (not systematically) and noticed some solar panels here and there, so we've a bit of ground truth to put alongside the aerial imagery. Here I'm going to show a handful of examples, using the standard aerial imagery. The main purpose is to get an idea of the trickiness of the task, especially with the idea of mapping purely from aerial imagery.

It took quite a lot of searching in aerial imagery to find any hits. Within about 30 minutes we'd managed to find three. Often we were unsure, because the distinction between solar panels, rooftop windows or other rooftop infrastructure is hard to spot unless you've got crystal-clear imagery. We swapped back and forth with various imagery sources, but none of the ones we had available by default gave us much boost.

While walking around town we saw a couple more. In the following image (of this location), the building "A" had some stood-up solar panels we saw from the ground; it also looks like "B" had some roof-mounted panels too, but we didn't spot them from the ground, because they don't stick up much. 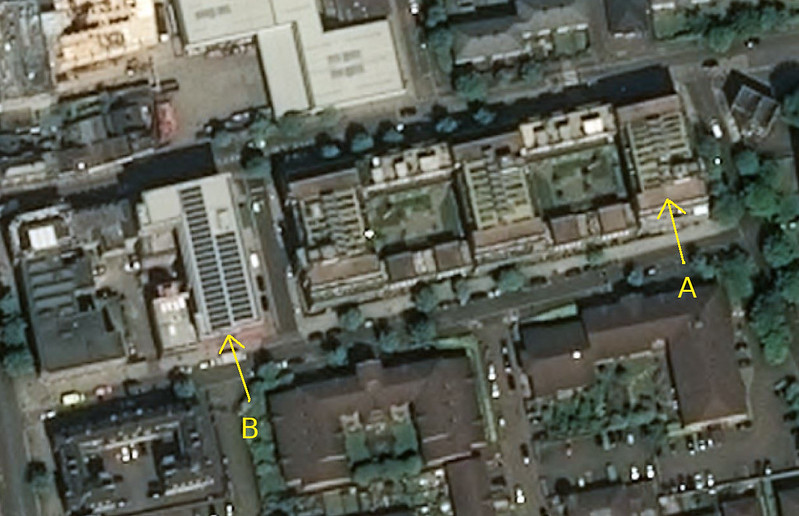 Finally this picture quite neatly puts 3 different examples right next to each other in one location. At first we saw a few solar panels mounted flush on someone's sloping roof ("A"), and you can see those on the aerial - though my certainty comes from having seen them in real life! Then next to it we saw some stood-up solar panels on a newbuild block at "B", though you can't actually see it in the imagery because the newbuild is too new for all the aerials we had access to. Then next to that at "C" there definitely looks to be some solar there in the aerials, though we couldn't see that from the ground. 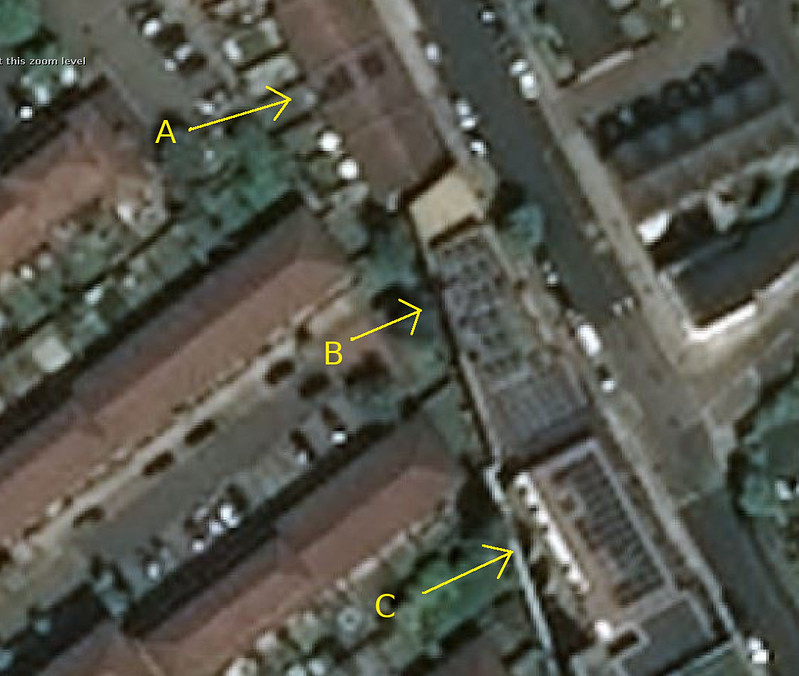 Our tentative learnings so far:

There are plenty of virtuous feedback loops in here: the more we do as a community, the better we'll get (both humans and machines) at finding the solar panels and spotting the gaps in our data.