While in Paris briefly (on my way somewhere else), I decided to go only to vegetarian restaurants. This helps to narrow down the list!

The curiously-named Sense.eat is an Italian veggy restaurant right in the centre of town, just a touch south of the river. Friendly and efficient atmosphere, and lots of really nice flavours. It was a good sign when they served a little starting-taste of creamed sweet potato garnished with wafer-thin slices of yellow beetroot - delicious flavour, expertly done. Then, for my starter, I had a puree of... well I don't really know how to translate what I had, but let's say a puree of some sort of pea, with courgette flowers, topped with fried kale and pumpkin seeds. It tasted ace.

For the main course I went for the fancy-sounding tofu crusted with quinoa, served with a big mushroom and a mushroomy broth. The tofu was fine, but to be honest not really more than the sum of its parts. The mushroom and the broth tasted really deeply though. You can't tell from a photo whether it's just a mushroom or something more, but rest assured it was really flavourful: 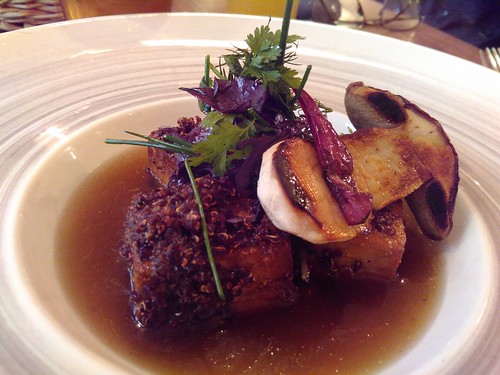 Later the same day I ate in Brasserie Lola. The fun thing about Brasserie Lola is that it's vegan but they basically keep that a secret - you can't tell from outside, in fact you can't really tell from the menu unless you peer really closely and wonder why the cheeseburger involves "seitan".

I had said cheeseburger and chips, and it's good. I also had a nice starter of leeks in vinaigrette. The sorbet I had for afters was a bit marred by being covered in cream (wtf?) but never mind. The place is nice and has a good feel to it, classic French brasserie style.

I've got to give credit to happycow.net for helping me find both these places.